Of all the Lemurs in the world, the Aye-Aye Lemur is the largest primate that is nocturnal. Some may think that it is not a primate. It is often though to be a Muskrat or some type of larger rodent due to the physical characteristics that it displays.

There are a couple of characteristics relating to the body of the Aye-Aye Lemur that are very different from other species. First, they have a very long middle finger that extends several inches beyond that of their others. They use this as a means of finding food. We will talk more about that later on.

They also feature teeth that at every long and sharp. These teeth continue to grow for their entire lives as well. In captivity special care has to be taken to ensure they don’t get too long. They have to be given items to naturally file them down as they have in the wild. Otherwise there is the risk of dental problems and decay which reduce the overall quality of life.

The coat of the Aye-Aye Lemur is often black in color. There are often those that feature a dark gray coloring though. All of them have thick fur which is hard to understand given the fact that they do live in very warm regions all year long.

They use their senses to help them to survive. They are able to find food and to avoid danger due to their sight and their smelling abilities. The scary look of them though has been a problem for them since the beginning of time. In many cultures the people consider the aye-aye an omen of ill luck.

While we don’t know much about the evolution of Lemurs as a whole, there are certain questions that only pertain to the Aye-Aye Lemur. They have a very different method of finding food. That involves their long middle finger. What occurred that resulted in this species needing such a benefit?

Many experts believe that they are the only animal in the world other that then Possum with this ability. It could have been a lack of food that caused this evolutionary change to occur for them. They needed a means of getting the food source which was the grubs. The longer finger allowed that to happen and ensured the survival of this particular Lemur species.

The other big mystery about the Aye-Aye Lemur has to do with the shape of their teeth. Why do they turn inward for this species but no others? Why do they need that benefit when there diet is no different from that of other Lemur species?

Being active at night means that you usually won’t be able to see the Aye-Aye Lemur in action. However, there are reports out there of them being seen active during the day. This is more likely to be the case during the rainy season. That is because they want to spend more time consuming the fruits that are offered.

The Aye-Aye Lemur continues to be a mystery when it comes to all the vocal sounds they make. They are very active with them but we just don’t have the means yet to identify what they all mean. What we do know though is such forms of communication are essential for the entire family group.

Even though they are so social at those times, these Lemurs also choose to be isolated. They can spread out greatly as they look for food. Then they will reconnected later on as a unit. The home ranges of these Lemurs frequently overlap. That is something that the dominant females aren’t very accepting of. They can become very aggressive if they know females outside of their family unit have been in the area looking for food.

Only around Madagascar Island will you be able to find the Aye-Aye Lemur in their natural environment. They tend to stick to the Eastern portion of it but they are known to be well scattered throughout the region. They love the rainforests but can’t always live there due to the habitat being destroyed by people.

The higher altitude regions seem to be attractive to these Lemurs. They enjoy the safety of the canopy of the leaves that spread out above them. This gives them the ideal location for creating their nests. 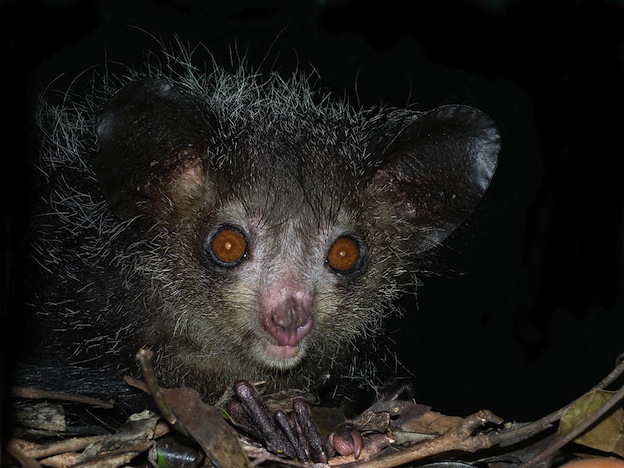 Remember that long middle finger I mentioned earlier? It is amazing how the Aye-Aye Lemur uses it to find food. They will tap on trees up to 8 times per second to find grubs and take them out of the trees. This is a very common form of eating for them that they are very good at.

They spend hours and hours each night eating as much as they can. They can cover from 1 to 2 ½ miles each night in order to eat. The idea is to eat what is available so they can store up fat to survive on during the dry season. When they can’t find grubs they will settle for fungi, fruit, and nuts.

During the mating season the males will become irritable and aggressive. They want to win the right o make with as many females as possible. This is really the only time when the males and females spend lots of time with each other all day and all night long.

It is great to observe the mothers with the young. They often play games with them, nurture them, and do all they can to help them survive. Their instincts for helping the young to survive are very similar to other primates including monkeys and apes.

The Fossa that is type of cat is a common predator of the Aye-Aye Lemur. Domestic dogs have been known to be bothersome for them as well. A couple of types of snakes that live in the trees are also able to feed on them.

Humans though are the biggest problem for this Lemur. The habitat is quickly being destroyed. This involves areas being slashed and burned. These areas are cleared out to help the villager’s plant agricultural items to feed their families.

The Aye-Aye Lemur is also part of legends and superstitions in many of these villages. They feel that this Lemur is a form of evil and that it should be killed immediately.

Many of these villagers are very poor and they cling to the legends of the past. They go on hunts as a group to kill as many of the Aye-Aye Lemur as possible. These legends don’t seem to be going away and as a result their numbers continue to drop at a rate that is going to be next to impossible to get back up.

Educating the villagers about the needs of these Lemurs has been impossible too. They don’t seem to care of they become extinct. In fact, many of them will tell you that it would be a good thing if they did. Yet those involved with quality conservation efforts aren’t ready to toss in the towel.