The Black Lemur is a type of primate and there are two subspecies that have been identified. They are the Eulemur macaco macaco and the Eulemur macaco flavifrons. In many locations the ranged of them overlap and that has led to mixed breeding. Some experts deem those mixed offspring as another species but they haven’t been fully credited or even named yet.

Other than humans, the Black Lemur is the only primate in the world that can have blue eyes. Many of them though have black or orange eyes. They have a very long tail that they use for balance as they climb and as they leap vertically. They have very strong hind legs.

Males have a dark color of fur and the females have a lighter shade of brown. While they are similar in size these color differences allow us to be able to identify the different genders with ease.

The Black Lemur is only found in the north of Madagascar. They are very diverse about where they live in this region. Some of them live in the rainforest while others seem to thrive in the dessert. They mainly spend their time in the trees but don’t be surprised to see them on the ground. 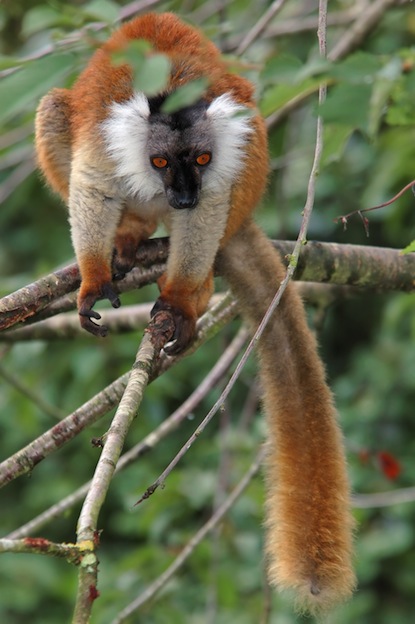 The Black Lemur is known to be out and venturing around both during the night and day time hours. They will forage on the ground as well as in the trees. They live in families with approximately 15 members. The females are dominant but the males are treated well among these primates.

Within these families the bonds are very strong. Fighting is very infrequent but can increase during the mating season. The males will often move around between families too in order to mate as much as they can.

Communication is found in the form of scent glands and vocalization for the Black Lemur. They can release very strong scents to stake a claim to their home territory. They can also make a variety of sounds including purrs, grunts, and shrill squeals.

Approximately 80% of the diet for the Black Lemur comes from various types of fruit. They do roam around often to find it. When they can’t get enough fruit though they look for insects, nuts, and leaves. They do prefer the fruit though so when it is plentiful they will bypass other food sources. During the dry season they have been known to consume soil in order to get some form of nutrients.

Mating takes place for the Black Lemur from April to May. Females are considered mature for mating when they are about 2 years of age. The males are approximately 1 ½ years of age for mating. A single baby is typically born but there are some instances of twins occurring.

The females are very good at caring for their young. They do all they can to nurture them and to meet their needs until they are old enough to take care of themselves. The young usually continue to have a very strong bond with their mothers though and don’t venture far as they mature.

We don’t know the exact number of Black Lemurs in the wild. This is hard to count due to the ways in which they disperse around the environment. However, studies show that their natural habitat continues to be diminished at the hands of humans. There are efforts in place to help protect them but it isn’t going to help if the government of Madagascar Island doesn’t make penalties stiff for those that purposely hunt and trap these primates.