The Collared Brown Lemur is a primate that is medium in size. There are 12 species of Brown Lemurs in the world. They are the most well known of these Brown Lemurs. They live in groups and that makes them very versatile to the opportunities that they find in their environment.

The tail of a full grown Collared Brown Lemur is about 20 inches. With an overall body of about 16 inches that can really show the length of that tail and how it almost doubles their overall body size. They weigh approximately 5 ½ pounds. You can tell the difference between males and females because the males have different colors of brown and red on top of the head. A female is only light brown in that location of the body.

The Southeastern location of Madagascar is where you will find the Collared Brown Lemur. The Collared Brown Lemur can be found living high up in the trees. They enjoy forests that are tropical as well as moist. They are well spread out among this area and that combined with the wide canopy of leaves makes it hard to see them in their natural habitat.

They are active both during the day and at night. The form very strong social bonds within their family groups. This is one of the few species of Lemurs where the females don’t exhibit dominance. The changes of the seasons and even the amount of light that is exhibited by the moon can affect the behaviors of these Lemurs. It is an area of study that many researchers find to be extremely fascinating. 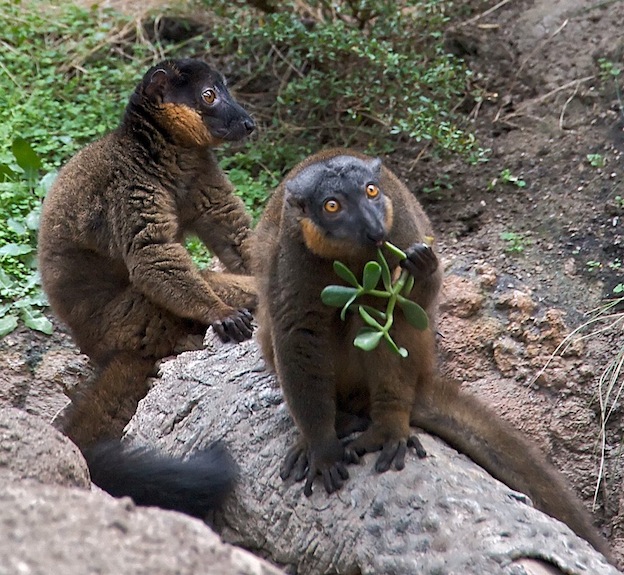 The Collared Brown Lemur has a big responsibility in their environment. They don’t eat the seeds of the fruits they consume. Instead, they disperse these seeds all over as they move about. This enables the forests to continue experiencing new growth.

There isn’t much known about the mating habits of the Collared Brown Lemur. It is speculated that they mate in their family and that the males may become aggressive for the right to mate. It is believed that the mating season falls along the times when there is the most abundance of food available for them.

The offspring can be born from October through December. Usually there is only one born at a time. There are reports by observers of the males in the family groups assisting with the day to day care of these young offspring. This could account for why the Collared Brown Lemur has a lower mortality rate than other species of Lemurs.

There isn’t as much conservation in place for the Collared Brown Lemur as many believe that there should be. They are on a list right now as being vulnerable due to the fast pace of their loss of natural habitat. The process of slash and burn agriculture as well as coal production have quickly dropped their numbers.

Hunting of the Collared Brown Lemur continues due to many villagers using them for meat. There is also money being made on the black market by them being sold as pets. Some of the efforts to help them involve protecting their natural environment and others involve them breeding in captivity.