The Coquerel’s Sifaka Lemur is a medium sized one and it belongs to the primate family. It features some very interesting behaviors as well as a look that is different from other Lemurs.

The skillful arms and the powerful legs of the Conquerel’s Sifaka Lemurs allow them to be able to vertical leap and to climb quickly. They have a very long body and they are often found sitting upright. They have a coloring that is mainly white or cream colored. They have dark brown or black on the face and the limbs. The tail is white and they may have maroon found on their chest area.

You will only find the Conquerel’s Sifaka Lemur residing on the Madagascar Islands. They live in the dry forests areas along the coast. They tend to stay to the Northern and Eastern parts of the Betsiboka River. They are also found along the Southern part of the Ambato-Bobni. The numbers of them out there in the wild though are hard to determine.

A family of Conquerel’s Sifaka Lemur ranges from 3 to 10 members. They live primarily in the trees and you will rarely see them living on the ground. They are also mainly active during the day. However, don’t be surprised if you do find one out and about at night. They have keen senses of smell, hearing, and sight so they are able to do well in their environment.

The females in the family will be dominant over the males. There is a very complex hierarchy within the family. The dominant females will have primary access to food and nesting areas. The main female has to be able to finish eating before any males are able to feed. Otherwise they risk being hit. 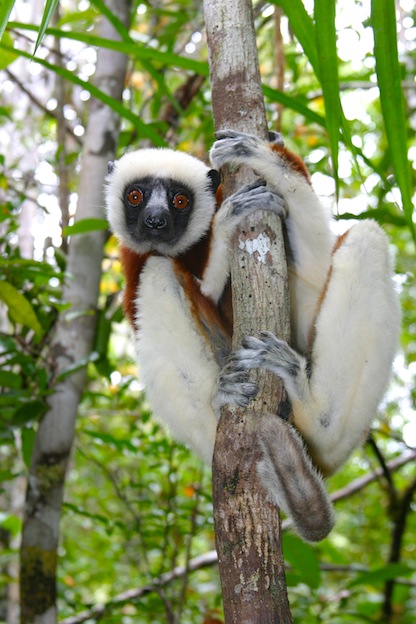 Soft chattering is very common among these Lemurs. While we don’t have lots of information on what their vocalizations mean, we do know that socialization is a big part of their ability to survive.

These Lemurs are often found in an upright posture. They may be found that way when they are sleeping too. They have been known to cross open spaces on the ground more often these days than before. This is due to their natural habitat being wiped out. They can’t just move through the trees as they did before.

During the wet season the diet is varied with fruit, leaves, wood, nectar, twigs, and more. During the dry season they tend to survive on dry leaves and insects. They aren’t picky eaters with more than 100 different types of plants that they will consume food from.

Females get to decide who they will mate with. She may select one or more males from her own group. She can also go outside of her family to find those she wants to mate with. Males often fight for her attention but she doesn’t always select the winner. It is believed that scents the males give off will often influence her decision for mating purposes.

The mating season is typically from January to March. The babies will be born about 162 days later. She will carry the young in her chest for a few weeks. Then they will move to cling to her back for about 6 months. They are considered fully mature around 1 year of age.

Protecting the natural environment of the Conquerel’s Sifaka Lemur is a very important part of the conservation efforts in place. When their natural habitat is destroyed it becomes very hard for them to be able to find food and shelter.