There are many wonderful facts about the Lemur that you may be interested in learning about. They can help you to have a new appreciation for these delightful animals.

The Lemur is a native of Madagascar. They are also found at Comoro Islands.

The word Lemur is Latin and means spirits of the night. There are many legends throughout cultures that talk about the Lemurs being active at night. They are nocturnal.

There are many different species of Lemurs. They include the Alaotran Gentle Lemur, Aye- Aye Lemur, the  Indri Lemur, Black and White Ruffed Lemur, Red Ruffed Lemur, and the Ring Tailed Lemur.

The smallest species of Lemur weights about 30 grams.

The tail is often longer than the body (In most species).

They have pseudo-opposing thumbs. They also have long toes. They use them for climbing and for holding on. They don’t have claws either. Instead they have nails in most species.

They don’t see in color and they don’t have good vision overall.

Most Lemurs live all their life in trees. However, many of the larger species also live on the ground.

It isn’t unreasonable to see some species of Lemurs active during the day.

The Lemurs are very social and the live in family groups.

Females have dominance over the male Lemurs.

The approximate life span of a Lemur in the wild is about 18 years.

Several species of Lemurs are currently at risk of being extinct in the near future. Even with conservation efforts there continues to be serious barriers to protecting them.

In some areas the Aye Aye Lemurs are trapped and killed. This is due to the fact that locals believe they are a bad omen and linked to evil spirits.

The largest Lemur species is the Indri and they can weigh as much as 15 pounds. The Dwarf Mouse Lemur is the smallest of all.

Most Lemurs in the world live on Madagascar Island.

More than half of all baby Lemurs will die before they are mature which occurs at 2 years of age. 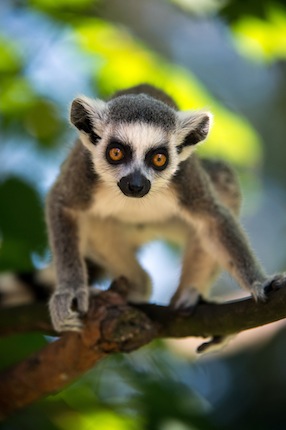 The Lemur isn’t able to hang from the tail but that is a common myth that continues to circulate.

The Indri Lemur doesn’t have a large tail. That is why so many people don’t recognize it as a Lemur when they see one.

Grooming and socializing is a huge part of the family life for the Lemurs.

The Lemur is the primate that is the most different from humans.

The two sources of communication between Lemurs include vocalization and scent markings. They are able to identify distinct family members through the scent they release.

You will find many stories about Lemurs in Roman Mythology. Some of the stories portray them as good spirits. Others portray them as something that should be considered evil and be avoided.

Some Lemurs hibernate when there isn’t any food around in given seasons. This is to help them be able to survive those harsh conditions without threats of them dying.

Lemurs seem to do very well in captivity. Part of having them on display is to help people to see them in to recognize their needs. Yet they are mainly nocturnal so that zoo guests may only get to see them sleeping.