One of the medium sized primates is the Golden-Crowned Sifaka Lemur. They are very limited in number and location. There isn’t much known about them and they were only identified as a unique species in 1974. They are a fascinating type of animal but much about them remains a mystery today.

The fur of the Golden-Crowned Sifaka Lemur is a white or cream color. On top of the head though is a crown of gold which is where the name comes from. They weigh about 7 ½ pounds as mature adults. They have a very long tail that they rely on for vertical leaping and for climbing. It is a myth though that Lemurs use these long tails to hang from trees like some primates are able to do.

The Golden-Crowned Sifaka Lemur has the most restricted distribution of any Lemurs on Madagascar Island. They are found along the Northeast portion of it. There are estimated to be between 6,000 and 10,000 of them that remain in the wild. They primarily live in the trees and stick to the lower elevations. However, if food is hard to come by they will move up higher to see what they can find. 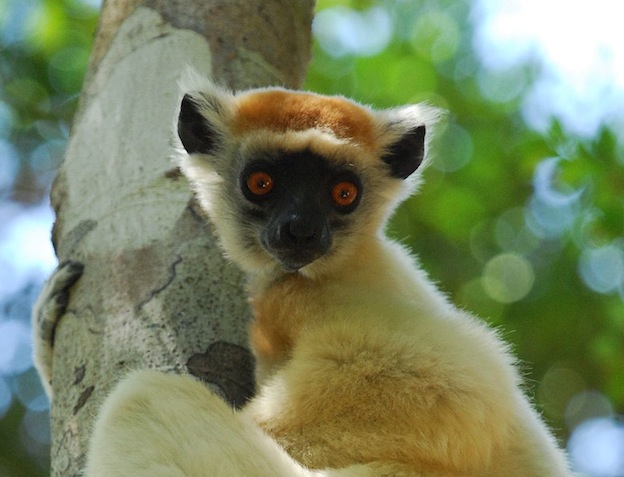 The Golden-Crowned Sifaka Lemur is usually active during the day. During the rainy season though you will find them being active at early morning too. They live in small family groups with about 6 members. There is usually a very close ratio of males to females in those family groups.

Scent markings are very common among these species of Lemurs, more so than any other of them. This helps them to find each other and to be able to tell if there are outsiders in their home range territory.

The Golden-Crowned Sifaka Lemur has a very large range of vocalizations that they offer. These sounds allow them to be able to find each other, to warn of predators, and even to give off the message that they are feeling stressed.

Due to the small geographical location where these Lemurs live, they only travel about ½ of a mile per day to find food. They consume nuts, fruits, twigs, and nectar. What they will eat often depends on the time of year. Since they don’t have a wide range for roaming they have to be very opportunistic with what they find. Seeds are a

Mating usually occurs at the end of January. The gestation period is close to 6 months. The young offspring will feed from the mother for about 5 months. They will be able to forage for food on their own as the wet season approaches. This is when there will be the most abundance of food available.

The mature females only mate about every two years. This slow rate of reproduction has been a big obstacle in the quest to increase the overall population. The fact that there is also a high mortality rate means that very few of them reach the age of maturity in the wild.

Since the Golden-Crowned Sifaka Lemur was first spotted in 1974 their numbers have continued to decline. Many experts feel they won’t be able to survive more than few decades if substantial conservation efforts to their natural habitat aren’t made. Illegal hunting and trapping continue to be problems to overcome. These type of Lemurs are often sold as pets.