It may be hard to believe that the Gray Mouse Lemur is a primate! In fact, many people think that it is a rodent by the name and the appearance of it. Yet DNA doesn’t lie and so it is correctly classified as a primate. There is still a great deal that we don’t know about this particular species of Lemur.

Of all the Lemur species in the world the Gray Mouse Lemur is the smallest. It is a mere 2 ounces when it is fully grown. The gray mouse Lemurs is the largest of the mouse lemurs. They are mainly gray in color and it can be a variety of shades from light to dark.

They may experience some changes in that color during various times of the year. A reddish tint can appear to help them continue to blend in well with their natural surroundings. They have a tail that is long and thin. At the end of it you will see it is very bushy. They have back legs that allow them to move fast and leap far. They also have a short nose.

The Gray Mouse Lemur relies upon its senses to help it survive. This includes a good night vision. They also have a very good sense of smell. They are able to get out of the way of predators quickly when they use the combination of these senses.

The mysteries surrounding the Gray Mouse Lemur don’t get any easier when the topic of evolution enters the conversation. We have no fossil remains of these Lemurs. Yet we do know that they have a strong connection to Lemurs that lived millions of years ago in Africa and then moved into Madagascar Island.

There are no clear answers when it comes to how this particular species evolved. Some popular theories though indicate that it got smaller due to a lack of predators around. Plus, this allowed it to survive on less food which could be why this species of Lemur survived and others from that time period didn’t. Only time will tell if we one day get the answers we are looking for in regards to Gray Mouse Lemur evolution and what has occurred throughout time.

They are categorized as being nocturnal so you will only find the Gray Mouse Lemur out at night. They have special elements of their large eyes that help them to easily adjust to the darkness all around them. They don’t live in families like other species of Lemurs do. Instead, they don’t seem to have the same high need for socialization in order for them to be able to thrive. They can sleep in groups during the day.

They aren’t easy to find in their environment either though. They can quickly hide at night. They can also find holes in trees to seek a place to create their nests. They need to sleep during the day so the idea is for them to be out of the way of any predators that may wonder along.

They do take part in a very unusual type of behavior for a primate though. This involves hibernating. Even though the weather doesn’t get extremely cold where they live they may not have enough food to live on. One way that they are able to get through the dry season is to hibernate for a couple of months.

Madagascar Island is the home for the Gray Mouse Lemur. They usually live their entire lives up in the trees and it is extremely rare to see one on the ground. If you do there is a good chance it fell out of the trees or that it was taken by a human out of a nest.

They only stay in a nest for up to 5 days before they make a new one. This is because they odors they give off can become too strong after a couple of days. That high level of odor is dangerous as it can draw predators to them. They move on as part of their overall survival instinct.

They enjoy the warm temperatures so they find areas of the forest here that offer them tropical temperatures. However, you can also find them living in the very hot and dry regions of the desert as sell. They seem to do very well to changes in their environment so when the trees of the forest are taken they may find a new home anywhere they can. 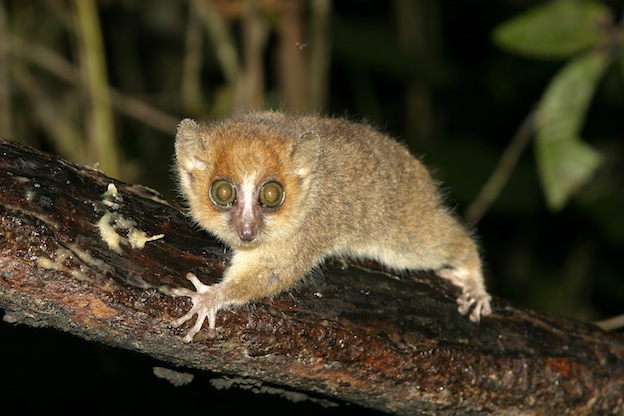 There are many different types of insects as well as fruits that the Gray Mouse Lemur consumes in the wild. They will also rely on nectar from flowers to get adequate amounts of nutrition. They move around as much as they need to in order to find food. This can be very tricky for them though during the dry season.

In the spring the Gray Mouse Lemur has the opportunity to mate. They can only do so for a few days a year though. This makes it hard to get the numbers of them to increase. They are considered to be fully mature when they are about a year old. After being fertilized the female will have up to two young about 60 days later.

She will do all she can to help them to survive. However, the mortality rate is more than 50%. Those that do survive will be fed by milk their mother’s body makes until they are 2 months old. Then they will start to find their own food sources. Studies show that the Gray Mouse Lemur is only about to mate for about 5 years.

Two species of owls – The Madagascar Low Eared Owl and the Barn Owl are prime predators of the Gray Mouse Lemur. It is believed that approximately 25% of these Lemurs succumb to their fate due to these two predators on an annual basis. The small size of these Lemurs makes it very easy for them to target.

There are several species of snakes that live in the trees as well. They find the Gray Mouse Lemur to be a delicious meal. They also find them to be very easy to find. The Ring Tailed Mongoose and the Fossa are also well known predators. In some areas there are many domestic dogs that also prey on these Lemurs.

Humans are a huge threat to the Gray Mouse Lemur. In many areas they are considered to be a nuisance due to the many nest holes that they created in the trees. They are also destroyed when areas of their habitat are cleared away to be able to use them for other needs humans have.

Aggressive conservation efforts are underway to be able to help them be able to get their numbers up. However, there are limited programs for these Lemurs in the wild. There are some refugee locations in Madagascar but it is impossible to keep out those that continue to hunt them illegally.