Lemurs often feed on nuts and fruits that they find in their natural habitat. These items are typically very easy for them to find in the trees. They will consume insects and even small animals when the fruits aren’t in season. Their feeding habits prompt the growth of new trees too.

As they move around they end up scattering the seeds. When there is less found around the Lemurs can’t do this adequately. Then there is going to be a storage overall of new plants and trees in the forest areas. This can have a downward spiral effect on other types of animals that live on Madagascar Island as well.

They are able to slow down their metabolism too when food supplies become very low. This allows them o be able to thrive rather then to starve during the seasons of the year when food is hard to come by. Even so, they may have a hard time adjusting to such harsh conditions when they linger.

When food is plentiful the Lemurs will consume as much of it as they can. In fact, many species are known to consume so much that they double in weight before the dry season. This allows them to store up enough fat for them to be able to survive on very little food for the upcoming season that lies ahead.

Studies show that the Lemur is highly adaptable to changes in their environment. Their home range can be come very large in order for them to find food. They may travel long distances during the rainy season in order to benefit from the abundance of food resources in the vegetated areas.

The young Lemurs will feed from their mother’s milk. This provides them with the nutrition that they need. Yet if food is hard for her to find her young may not survive. What is interesting though is that the young usually arrive around the time of plentiful food sources. This is part of nature’s way to help the Lemurs increase survival rates. 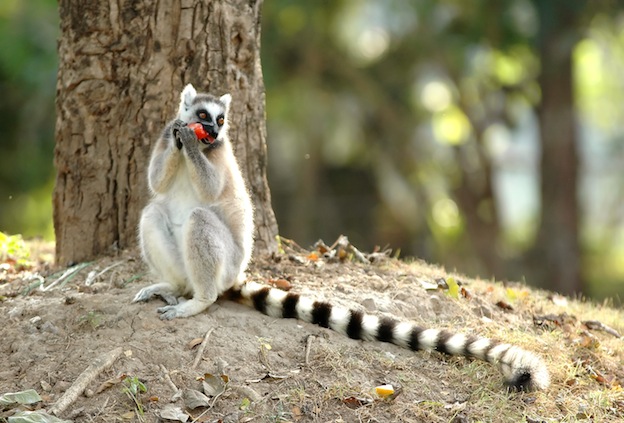 When the first molars start to emerge for the young they will jump of their mother’s back. They will then start to forage for their own food. This is when the young are the most vulnerable to the various predators around. They also risk falling out of the trees as they aren’t skilled enough for movements. This includes using their tail for long distance leaps.

Even though the individuals find their own food the dominant female has a very strong influence over the eating habits. When there is high levels of stress in the family they will all tend to eat less. Also, the other family members follow the lead of a dominant female.

Lemurs are well known to fight among themselves. One of the major causes of conflict has to do with not enough food to go around. When that occurs the females high on the chain of command will consume first as will their offspring. Many of the males are then pushed out of the family or they leave on their own for food.