The Verreaux’s Sifaka Lemur is medium in size when compared to other species. It is a primate and looks very similar to many small species of monkeys. As a result it is usually accurately categorized as a primate. That isn’t always the case with many other species of Lemurs that have a very different physical appearance. This is the only species of Lemur to have hands and feet that are slightly webbed. There are four known subspecies of this particular Lemur.

They are mainly white in color with a black face. They have a very long tail that helps them to leap and to remain balanced. They have a body that adapts very well in the trees. However, when they are on the ground they can move by hopping or walking in four legs. This isn’t’ very fast for them and it takes a great deal of energy.

They grow to about 18 inches when they reach maturity. The tail can be up to 24 additional inches. They can weigh from 7 to 8 pounds with the males usually being larger than the females. They have dental differences that set them apart from other species of Lemurs. They are sharp but angled inward towards the mouth. 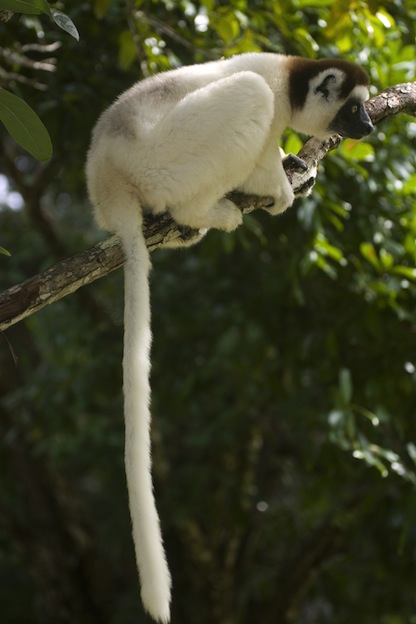 Madagascar Island is home to the Verreaux’s Sifaka Lemur. They do take up a variety of habitats though. They range from the wet tropical rainforests to the spiny dry forests.

The Verreaux’s Sifaka Lemur is very territorial in terms of habitat so that they can protect nesting areas and their food sources. There can be only a male and female in a family group. Others have a mixture of up to 12 members.

Feeding usually occurs in the early morning and then again in the late afternoon. They will take a break and rest during the heat of the day. Leaves are the type of food that the Verreaux’s Sifaka Lemur enjoys the most. However, they will eat a variety of items including twigs, bark, nuts, and fruits.

They tend to select their foods though based on quality. When food is plentiful they may bypass certain items to find what they like the best. 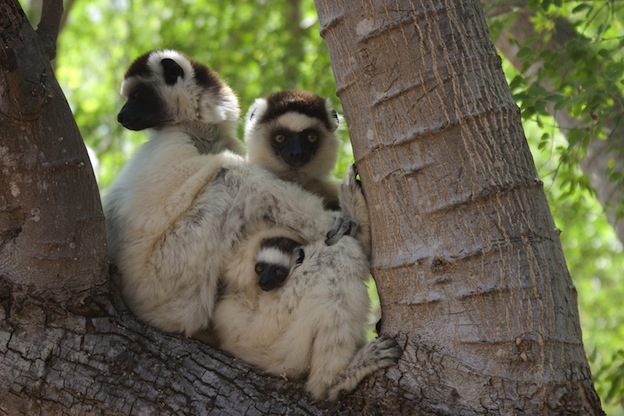 The dominant male of the family group is the only one that mates. He won’t be related to the females in the group though. The females often accept a mate based on the grooming that he has offered to her. This is why the females are more likely to get groomed when they are in estrus.

They give birth to a single offspring most the time. Sometimes twins are born. The young stay on the stomach of the mother for about 10 weeks. Then it will be transferred to the back where it will ride around until it is able to fend for itself in a couple of months.

The Verreaux’s Sifaka Lemur is a primate that has a very grim outlook for the future. They are categorized as being vulnerable at this point in time. The quick destruction of their natural habitat is the major threat to them. In many regions they are hunted by villagers as a source of meat. These villagers also take money or supplies in exchange for showing hunters where these Lemurs can be found. Sometimes these primates are also sold as pets.

It isn’t known how long they live in the wild with the right conditions. However, the Verreaux’s Sifaka Lemur has been known to live well in captivity. The average lifespan there is 18 years.